All Diamonds Are Not Created Equal!

Let us help you pick the perfect diamond!

When it comes to determining  a diamond's quality and value, there is a universally accepted standard know as the "Four C's":  Carat, Cut, Clarity and Color. These "Four C's" must all be considered when purchasing the right diamond. Two diamonds of equal carat weight may vary substantially in price due to their Cut, Clarity and Color. But keep this in mind: bigger isn't necessarily better. A two-carat diamond that is cut poorly is not nearly as beautiful as a smaller diamond cut by a skilled diamond artisan. Or, it may be cut well, but have poor color and clarity.

To be exceptionally beautiful, a diamond must be of high quality in all Four C's. Within seconds you will know whether a diamond is right for you.  We believe that your perfect ring should reflect who you are or who she is.  We feel strongly that your inital emotional response to the brilliance and style of a dimaond is of theutmost omportance in choosing your diamond.

Browse our wide array of elegant styles and select a diamond ring that represents your love and commitment. We are here to help you every step of the way. 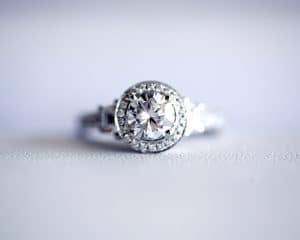 A diamond's weight is determined by carat weight. One carat is divided into 100 "points" so that a diamond of 25 points is described as a quarter of a carat, or 0.25 carats. Size is only one factor in determining the value of a diamond. Of The Four C's, carat weight is the easiest to measure. A carat weight measures the weight of a diamond.

Clarity is an indication of a diamond's purity. When a rough stone is extracted from carbon, deep beneath the earth, tiny traces of natural elements are almost always trapped inside. These elements are called inclusions, though sometimes referred to as birthmarks, because they are formed naturally and are unique to each stone. Because most inclusions are not visible to the naked eye, a jeweler will use a magnifier known as a loupe to reveal a diamond's inclusions.

Color is the natural body color visible in a diamond and is the one C determined completely by nature, not man. As a rule, the closer a diamond is to colorless, the more valuable and beautiful it is. Diamond colors appear in a range. Color grades D, E and F are considered colorless, making them rare. However, even more rare than the colorless are the fancy colored diamonds. These diamonds are beyond the Gemological Institute of America (GIA) color scale. There are well defined colors that include pink, canary yellow, blue and green…highly priced, extremely rare, major showpieces!

What is fluorescence?
Fluorescence is the visible light some gemstones emit when they are exposed to invisible ultraviolet (UV) rays. In natural diamonds blue is the most common color of fluorescence, but other colors may be visible.  On a GIA Diamond Grading Report fluorescence refers to the strength, or intensity, of the diamond’s reaction to long-wave UV, which is an essential component of daylight. To learn more about diamond fluorescence visit GIA.

Is fluorescence common?
Yes.  Of the diamonds submitted to GIA over the past decade, approximately 25% to 35% exhibit some degree of fluorescence.  However, only 10% of those show strengths of fluorescence that may impact appearance (i.e. strengths noted on laboratory reports as medium, strong or very strong).  In more than 95% of the diamonds that exhibit fluorescence, the color seen is blue.  In rare instances, the reaction is yellow, white or another color.

Does fluorescence compromise the structural integrity of the diamond?
No. A diamond that fluoresces has the same integrity as one with no reaction to UV.  Submicroscopic substitutions and/or shifts in the diamond structure can cause fluorescence as well as prevent it.  Nothing in either instance inherently weakens or is bad for the diamond.

What you need to know about certified diamonds.

All diamonds are not created equal – let us help you pick the perfect diamond!

information on some of your favorite gemstones.

Get the most out of your jewelry with the proper care.